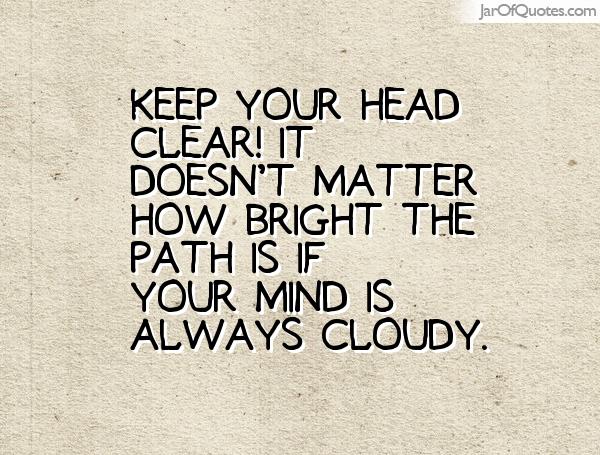 When you’re dealing with a clouded mind, it’s hard to shake it off right away, although you may try your hardest, we all know that it ain’t always easy getting rid of the thoughts that form within that little cloud we got following us around everywhere, sometimes it grows so big that the cloud ends up changing into a storm cloud making our mood change with it and now we’re walking around wondering when that storm cloud is gonna part from us. Clouded minds form in different ways, sometimes they happen when you wake up in the morning or during the middle of your day, they can pretty much occur anytime of the day, you could be having the best morning and once the afternoon comes rolling around there goes your thoughts and all the happiness you had going for you………clouds of thoughts aren’t always a bad thing though, sometimes they help you reflect on your day or help you sort through certain things that need sorting, however clouded thoughts can also make your mood go from a 5 to 9 (you never want to get to a 10 because then that’s when the lighting strikes)

Now let’s talk about trying times, I know there’s like a 3 word saying with trying times but I can’t remember exactly what the other two are, so we’re just gonna go with the theme I created…..anyway, trying times……….i’m not sure if anyone has a different meaning when it comes to trying times, but to me trying times has to do with dealing with all the things around you, but still trying your best to get through them, i’ll be honest today i’m not really having the best of days, but i’m trying to still get through the day and try and make the most of it as much as I can. On a good note, it’s been raining and if I haven’t said it already I enjoy the rain, every time it rains I always go outside and just take it in……I don’t know I guess I just like the feel of it and the way it comes down, it’s just really nice.

Back to trying times though (Sorry got caught up talking about the rain ha) like I was saying trying times is going through life and the day and just trying to see the better picture in something that you really aren’t feeling in that moment, but you’re still determined to try and understand and get it, even though some days are tough compared to when you’re having a good day. Trying times is having someone you care about go through something and you wanting to help, but you’re unable to do so in the way that you want to, yet you still do your best to make sure they know that you’re there when they need you and you’re always gonna be there because they mean so much to you. It’s just all about how even when you know or feel like you aren’t able to really get into something that you might normally, you still try and you still do your best because you have to and because you want to be strong in a situation that isn’t always easy to be strong in, but you do it because you feel that it’s gonna be worth it at some point and you want to prove to yourself that you can stay strong and what you’re feeling is only temporary.

Now let’s get into our last topic here……..Uncertainty, everyone deals with uncertainty in their lives, some more than others, whether that be because their whole life that’s all they dealt with growing up or it occurred down the line due to a mental scaring based off an event that took place in their life and so now with certain things they tend to worry about whether something will work out or not or if what their doing in their life is good or bad for them. Dealing with uncertainty and having those doubtful moments aren’t the best feeling, because it puts you in such an anxious or paranoid mode that when you try and escape it, it just kinda brings everything back and then you start to question everything and it just becomes such a heavy weigh on you to the point where you feel like you just hit a brick wall without even realizing that you were even walking in that direction. You can try and tell yourself that you have nothing to worry about and for a bit it will work, but it will only put that feeling to a halt for but so long until that brick wall comes tumbling down on you making everything 1,000 times worst then it was already.

Some may think that it’s easy to get rid of uncertainty once you feel it by telling yourself you’re fine, brush yourself off and keep moving, but for some people it’s not always that easy, it can take them a very long time to get out of that mindset and if you’re dealing with that quite often, sometimes you need someone there to help and reassure you that everything’s gonna be fine and that you will be there to help them get through those uncertainties that they are facing. It’s gonna take a lot of patience and everything because it will come and go for them, but as long as you let them know that no matter what you’re there for them they’ll be fine, it doesn’t matter how many times they need reassurance, you’ll always be there to make sure they’re okay and let them know that with you they are safe and they’re not alone, because you’re gonna help them get through it and for some that may seem like a lot of reassuring, but if you really care and love someone truly, that won’t matter because to you they are a priority and it’s important to show them that their happiness and wellbeing is important as well.

We all have different mindsets and people think that some of us are able to shake things off quickly, but it’s not always that easy, some of us need a little more time to really understand our thoughts and others may need someone to help them through theirs and that’s okay. So if you’re ever having a clouded mind, don’t be afraid to process your thoughts and sort them out, know that you will get through trying times even if it doesn’t feel like you will, you just have to give it time and lastly when you’re feeling uncertain or you’re dealing with uncertainties in your life, know that you don’t need to deal with it alone, I know it feels like there’s just so much going on and maybe there is, but know that everything will be okay and there’s always someone there to help you through your uncertainties.

That is my blog post for the day, I hope that some of you were able to take something from this and hopefully found this really helpful if you are dealing with anyone of these things, with that I hope you all have a goodnight/morning and or evening 🙂

to write about the sun rays