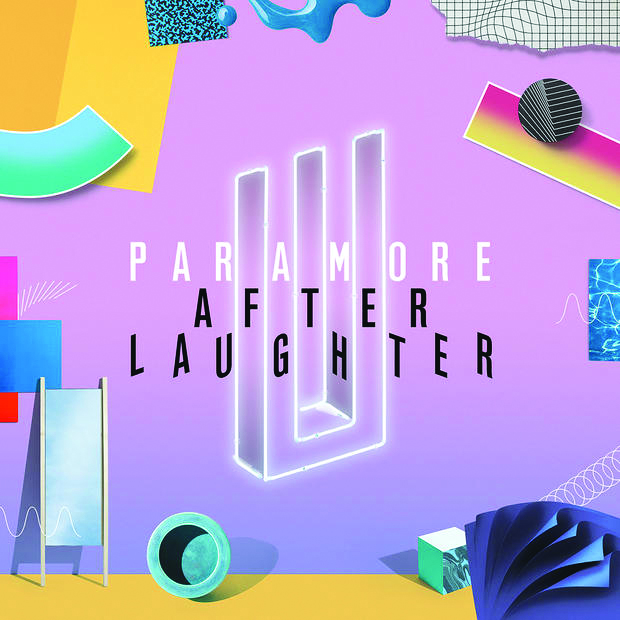 Hey there everyone, okay so i’m not sure how long this is gonna be, it might be very long, but it might not be at the same time, we’ll just see as we go along. I hope you guys are all doing well, today I wanted to discuss and review an album, i’ve never reviewed an album before, only certain songs, but I thought i’d give it a try and just see how I do with it, today we’re gonna be discussing Paramore and their latest album After Laughter. Now for those who don’t know Paramore well they’re a band of course, their genre of music goes from: Alternative rock, Pop punk, Pop rock ect….

Obviously when you’re a band or an artist, you tend to want to change your sound if you’re feeling you want to mix it up a bit, instead of always sticking to the same one, now before we talk Paramore’s latest album, I just want to kinda do a little backstory on them just so you can learn more about them, so without further ado, let’s talk a bit about Paramore: Paramore’s first debut album was All We Know Is Falling which came out back in 2005 and featured songs like Pressure, Emergency and Conspiracy, now i’ve heard Pressure and I believe i’ve heard Emergency not sure on Conspiracy, but at the same time I feel I might’ve heard it once or something i’m not sure.

Their 2nd album Riot! came out in 2007 one of the famous songs from that album is the good ole’ classic Misery Business, as well as other songs like CrushCrushCrush, That’s What You Get and one of my favorites When It Rains. Now even though Paramore had made two albums and all these lovely songs, it wasn’t until their breakout hit Decode to where they started to become well known and very popular. Decode featured on a popular hit movie that i’m sure all of you are aware of and if you’re not then don’t worry it’s okay, you’re not really missing much in my opinion, but the song appeared and was one of the featured tracks off the famous movie Twilight.

Everyone (mainly teen girls) loved Twilight, if you haven’t heard of it again don’t worry about it, but if you have, you know what i’m talking about here, there was even teams made from that movie, not kidding!! Twilight came out in 2008, it’s about this sparkling vampire guy named Edward, a teen girl, I think her name is Bella and a werwolf name Jacob, there’s more to the movie of course, but i’m not gonna go into it because this is about Paramore, I just thought since I brought up Twilight, might as well give you a brief description on it.

As I said before Decode was one of the featured songs off there and was actually very popular too, I remember coming across that song because the music video was on and also because it was one of those songs that was just everywhere, no matter where you went, you would be sure to hear that song. I can’t remember exactly, but I believe I wasn’t too fond of the song at first and i’ll be honest I think I might’ve judged it quickly because of the fact that I didn’t like Twilight (still don’t really like Twilight) I do however like the song decode now though. Decode also appeared on Paramore’s 3rd album I believe, Brand New Eyes, along with the songs Ignorance, Playing God and Brick By Boring Brick making it’s debut in 2009. They have more albums, but those are just a few of them that I wanted to talk about, but let’s get on to their new/latest album After Laughter and talk about the songs.

These are the songs off the album with small descriptions to them, all the songs are about Hayley Williams and her bands personal life:

1. Hard Times– Is pretty self explanatory, it’s all on Hard times and how even though we have them we don’t ever hit rock bottom (that’s an actual line in the song)

2. Rose-Colored Boy– This one is a little hard, but I think it has to do with someone who’s always so optimistic, while everyone else isn’t.

3. Told You So– This ones all about having those people who love to look for and call you out on your mistakes and love the whole Told you so line that Hayley sings about in the song.

4. Forgiveness– Is on the personal side of town, Hayley sings about not being able to forgive someone that hurt her really badly.

5. Fake Happy– Is a very clear song about pretending you’re happy when you’re not, but also knowing that you’re not the only one feeling that way.

6. 26– Is about keeping hold of what’s left of your hope and happiness the older you get, so this is one of her reflective songs.

7. Pool– Is metaphoric dark love song, you’ll have to hear it to understand it

8. Grudges– Pretty self explanatory, it’s all about letting go of grudges that we hold against someone.

9. Caught In The Middle-Is what I would probably say to be a reflection songs on Hayley early days in Paramore as well as her life in general.

10. Idle Worship-Is a song to all of her fans where she expresses that she shouldn’t be looked at as an idol.

11. No Friend– Is a letter she wrote to her fans, but it’s not sung, it’s spoken and she doesn’t speak the words, but a friend of hers does and it’s pretty interesting, different, but I like it.

12. Tell Me Now– Is…….i’m actually gonna let this one speak for itself, so give it a listen if you’re curious.

Now a lot of people complain about Paramore’s new sound and everything, but in all honesty I like their new sound, it’s different, but good different in my opinion. I think what it is that people don’t like about Paramore sound is the fact that’s it’s all poppy sounding now and I get having a favorite artist or band and knowing them from when they first started and being so used to the music they use to make, we all would love to have our favorites stay with the same thing, but at the same time if they feel they need to grow and want to experiment with other sounds then who are we to say they can’t.

These artists and bands make music not for us mainly, they write their songs from personal experiences that they share with us and maybe it’s different to how they use to do it, but if they decide they want a different sound then they have every right to change it up, I mean it is their music, we aren’t in any position to demand they stick with the new sound or old sound at all. If we really love that said band or artist we will grow with them and their music without hesitation, plus I always feel that sometimes it’s good to change it up as well as giving things a chance before judging it right off the bat……..I like their new sound, but that’s because I like Paramore and again if they felt in their hearts they needed to change something with their music then you gotta trust and embrace them on their sound, even if you may not like it.

Also if you think that these songs are just pop songs really listen to the lyrics, just because a song is upbeat doesn’t mean that the lyrics don’t have a deeper meaning to them, this whole album is upbeat with the exception of 26, Tell Me Now & Forgiveness (theses are the songs I consider to be not so poppy, but still great songs) The lyrics hidden behind the poppy dance music are actually very deep and dark when you really listen to it.

It’s all about reading between the lines, with this album and I love it, i’ve become very obsessed with this album and I just heard it the other day, some of my favorites are: Fake Happy, 26, Hard Times, Tell Me Now, Rose Colored Boy & Caught In The Middle, these are the songs i’m constantly playing over and over, although I love the whole album in general, it’s great, but Paramore has always been great, even with the sound change they’re still an awesome band, but that’s just my opinion.

Let me know your thoughts on After Laughter, have you heard it and if so what are your favorite tracks from it!?